Light Piercer is a classic Ikanoid action game, bounce the sharur wrecking ball into satellites to destroy them.

In the far distant future Year 1997 global warming put mankind on the edge of extinction. The governments of the world decided to build a space sunshade named "Light Dam". Which is over 900 satellites placed in a giant rectangle in front of the Sun, which filters down the light to Earth reducing global warming.

Without light from the sun all life on earth began to freeze to death.

Operation Light Piercer was launched it is your mission to destroy the "Light Dam" using Sharur Wrecking Ball before mankind is doomed.

Move space Hawk left or right, by using the mouse.

Space Hawk is Supported by spaceships called Space Canaries which can take a limited amount of damage. The Space Canaries will be piloted by death row prisoners, if the mission is successful, they will receive a full pardon.

The more you ascend the Light Dam, the harder is to damage the satellites. The Light Dam is made up of four levels, each one tougher than the last. Each level contains a brick wall made up of satellites. Satellites have been deliberately set to garish colours to make it harder for you to concentrate on them.

The satellites can only be destroyed by the Sharur Wrecking Ball. Each level contains a timer once the timer reaches zero, Earth will freeze solid and everybody will die.

The very top of Light Dam is where Boss Judge Apate lives.

Boss Judge Apate which is protected by extreme gold plasma force Shields. This fight is not going to be easy It will test your skill endurance and accuracy to the Max. If you fail the whole life on earth will be extinct!

Hi guys this is my first game, I would like some Constructive feedback and bug reports.

I hope you all enjoy it. 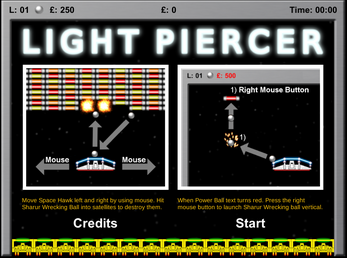 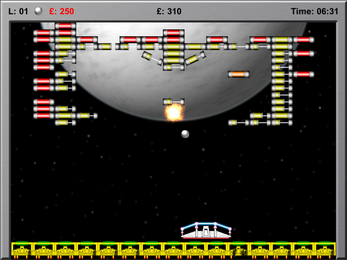 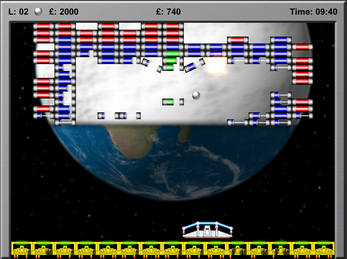